Back in May, I got the idea to decorate Will's nursery in a transportation theme (this allows me to incorporate fire trucks in his room without it being overwhelmed by them). I was inspired by Pottery Barn Kids where I saw these pictures: 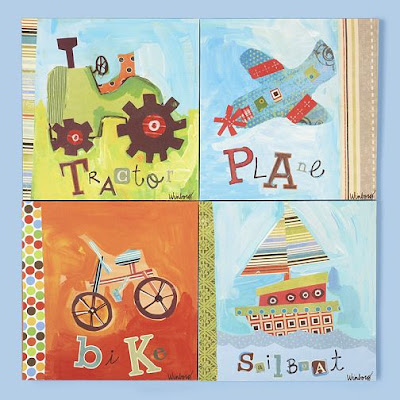 However, they cost a little over $80 per picture after tax. This got me thinking that I could make these myself - it just looked like canvases decorated with paint, scrapbook paper, and Mod Podge. I called my artistic friend, Marisa, to see if she could help me out since I'd never painted anything except for in my elementary school art class. I have done plenty of artsy projects in the past, and knew I would be able to at least draw the pictures & then learn/improvise from there.

This is how the canvases started: 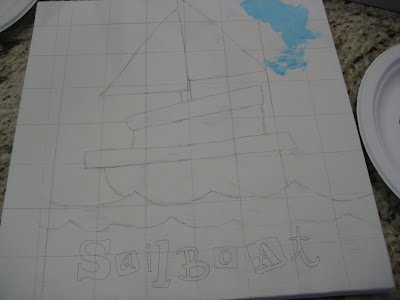 Marisa showed me how to use acrylic paint & different kinds of paint brushes, and after our first day working together, this is what we ended up with. She took responsibility for the tractor, and I did the others: 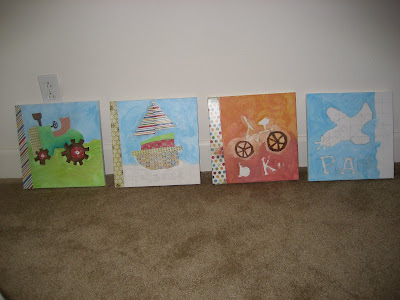 We got together again about a month or so later and got this far: 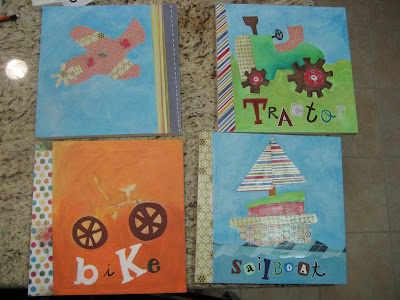 We were then going to get together today to finish them, but Marisa was stuck without a car 2 hours away. I kept thinking I should just get them out and finish them myself, but I made the excuse that I didn't own any paintbrushes (plus I was intimidated to do the letters without Marisa). However, the nesting instinct really kicked in, and I wanted to finish the pictures today. So I went to the craft store and guessed at the paintbrushes I should buy, came home, fixed up some details on the canvases, braved painting the remaining letters, painted the borders, & added the finishing touches. So here are my completed Transportation pictures. I'm so proud of myself. I knew I would be able to do it, I'm just so happy with how well they turned out & that I made something so cute for Will's nursery (plus to make all four of these cost less than the price of buying one at PBKids). 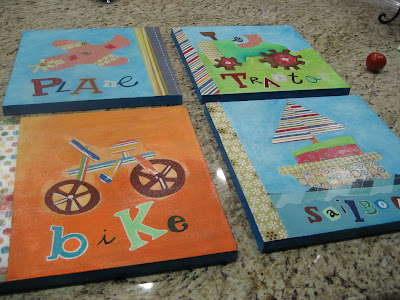 Thanks for your help Marisa! I had so much fun hanging out with you & doing yet another crazy art project (not quite as crazy as our President t-shirts: Abe Lincoln (Marisa's) & George Washington (mine) drawn with sharpie on neon shirts & then accessorized w/ gold sequin eyes, puffy paint & cut out quilt fabric for clothes - good times).
Posted by Liz at 10:50 PM 19 comments:

It's the home stretch, and Scott and I have so much to do before the baby comes - I need to put the nursery together, register, pick out a stroller (there are way too many different kinds), finish the baby quilt I'm making, finish the decorations for the nursery (Marisa, I need help if you can - it just recently hit me that I don't have much time left to procrastinate), pick out paint for the entire interior of the house, go to delivery, newborn, and breastfeeding classes, etc.
Yesterday, Scott went and picked up some of our newly arrived furniture for the nursery. It's amazing how close we're getting to having our sweet boy here - just under 8 weeks now if he's on time (I'm trying really hard not to get my hopes up that he'll actually arrive before or on his due date). Scott and I are so excited. We love William so much already and can't wait to hold him in our arms. We continue to pray that all will go well and that he will be healthy and safe. It seems like we waited so long to get him, even though I know others have to wait so much longer for their own children. It still seems unreal that this miracle has happened in our lives. I am terrified at times that it will all disappear, but I know I need to continue to have faith, hope, and joy - I can't live my life in fear of "what if" because otherwise that question would never go away. I need to embrace the moments that I have and trust in God, believing that all will be well. Thanks to everyone for your prayers, support, and encouragement. We love you. 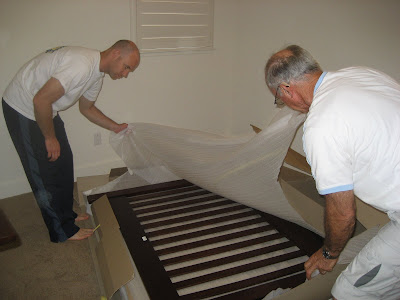 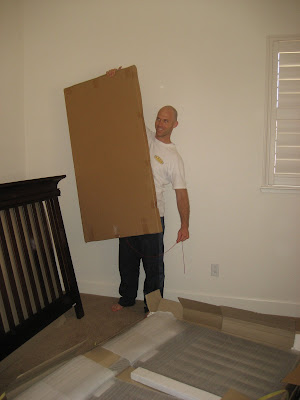 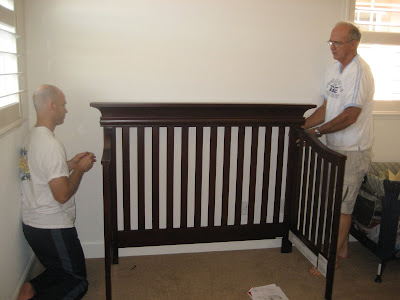 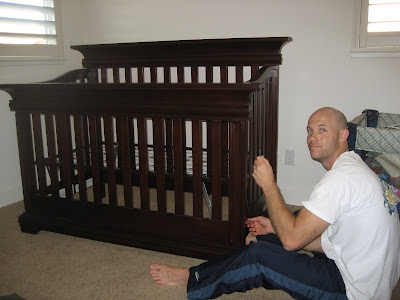 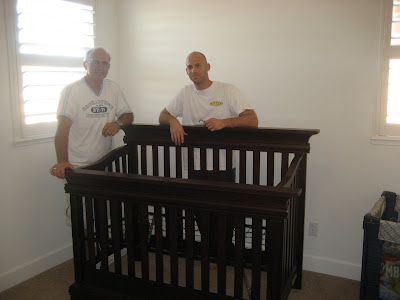 Gathering at Our Place

Scott & I invited my family up here for dinner tonight (My parents & two of my brothers and their families live about 2 hours away, and we had never invited all of them to our house after living here for over a year now - we're total slackers, and time goes by way too fast). Steven & Amy couldn't make it up, but Brad & Rachel were able to come up for the first time. Anyway, we had an amazing dinner and a great time just hanging out. It also happened to be Drew's birthday, so Rachel (& the kids) made his birthday cake, & we were able to celebrate with him. It was so great having everyone up here. Thanks for coming. 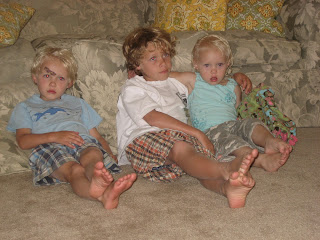 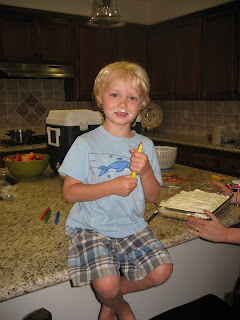 Sammie was tired from being in the sun & playing at the water park before coming to visit us. Fruit seemed to make her pretty happy though. She took such big bites that she couldn't even shut her mouth to chew, so my brother held a rag under her chin while the juice poured out as she ate. She's such a character. 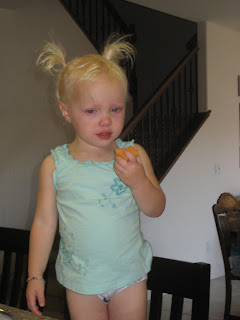 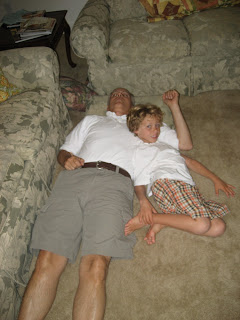 Happy 5th Birthday Drew! (Rach accidentally grabbed the #6 at the store, but it's his 5th birthday. Drew didn't seem to care - he just laughed about turning 6 instead of 5.) 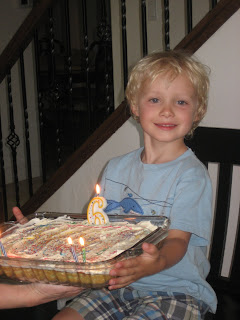 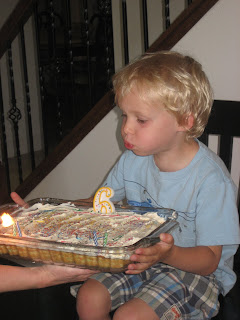 Face wash, Contact solution, & Nail polish - all things that I wanted or needed to buy that I got for free. 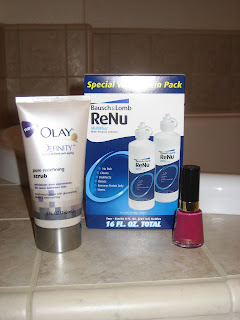 I have been trying for a while to find ways to cut back on our food spending. I make meal plans and grocery lists before I go to the store, so I won't buy any extra items. I also try to follow through with actually making the meals, so that we don't have to go out to eat (I greatly need to improve on this). Over the last few weeks, I have come across (just by chance) articles that talk about using coupons to drastically minimize your grocery bill. I never thought too much about using coupons because we shop at Wal-Mart, and their prices are already so low. However, I had two other friends mention on their blogs how much money they had saved (as well as how much food storage they had accumulated) by coupon shopping. So, yesterday I started my experiment (I actually prepared for a few days before that - I made a list of just about everything I could think of that I would ever buy, from produce to Pillsbury cinnamon rolls to toothpaste). Because Wal-Mart's prices are already so low, oftentimes the lowest sale prices at other stores are still more expensive, so I went to Wal-Mart with my list I had made the day before, and wrote down the prices of as many of the items as I could find (there were a lot of items). I started thinking, "Why am I spending time on this? I'm so tired of recording the prices, and I'll probably never look at them again to compare to other stores' sale prices." However, I was then able to buy the few things I needed from Wal-Mart & then go to Safeway where, because I had made my comparison list, I was able to go straight to the sale items that were even cheaper than Wal-Mart's prices. I then went to Rite Aid & gathered a few of their really cheap sale items & even got $25 worth of stuff for free. I am really excited about building my storage supply & saving money on my everyday groceries. Thanks Anne for the website referral (It breaks down all the sale items in the grocery stores around you, and tells you what's a good deal, a rock bottom price, & items you can get for free, whether at the store's sale price or with the addition of coupons). Check it out if you're interested. It's really not as time consuming as I made it by recording my own prices at Wal-Mart. I'm just a total nerd & wanted to make sure it was even worth using coupons if Wal-Mart's prices would still be lower than other stores anyway. I recommend at least doing the trial period. If you have any questions let me know, and if you sign up, I would love if you would use me as your referral.
Posted by Liz at 10:51 AM 9 comments: